For those of you that missed it, Chapter 1 of this saga can be found here.

We left off with the initial simulations looking peachy keen and me feeling hopeful that the hardware implementation would work. However, as these things usually go, the first time I fired the filter up nothing worked right. From Figure 1 below you can see nothing really met spec other than the response was bandpass shaped.  The center frequency for a single stage was 9 MHz rather than 10 MHz, the attenuation was much less steep then expected, and where the heck did the gain go? 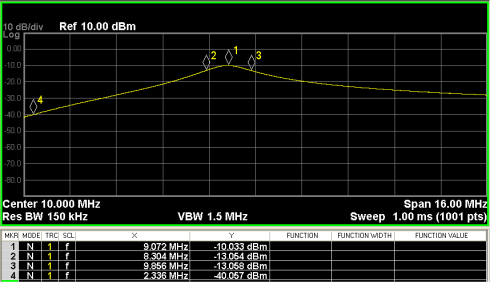 Clearly something was wrong and I spent a few days trying to figure out what exactly that was.  Going back to my simulation I started to “beat on it” as one of my professors would say.  I stuck small capacitors to ground (~10 pF) on various nodes to simulate board parasitics and watched the Bode response change. Sure enough, the input nodes to the op amps  were very sensitive to parasitic capacitance and I was able to reproduce the terrible response I was seeing on the spectrum analyzer.  Being somewhat stupid and inexperienced I had unfortunately decided to go against the datasheet’s suggestion on page 20 to remove ground planes from beneath the amplifier.

I didn’t have the option of ordering a new revision of the board so in order to fix the problem I had to get creative.  Eventually I went to ask the director of the surface mount soldering lab if he had any suggestions on the best way to partially remove my unwanted ground plane.  His suggestion, mill it out by hand using the small drill press in the lab. 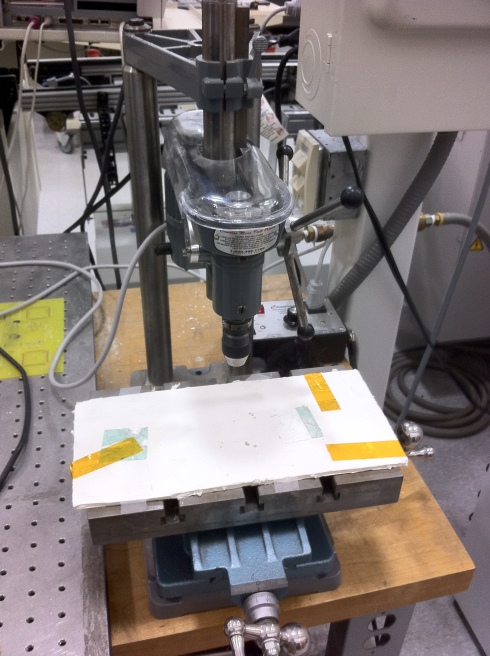 With sweaty palms and a beating heart I carefully began to mill out the ground plane beneath each of the three filter stages on my board.  Did I mention that I left the components on while do this? Well I did and the whole time I was working I was terrified that I’d drill straight through an op amp ruining the both the part and the PCB. Probably not the smartest thing I’ve ever done but after a few minutes I emerged victorious. Now to retest the filter and see if it would cooperate. 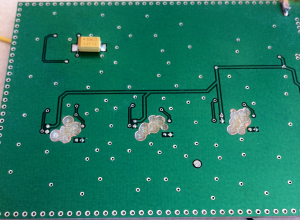 Sadly, things were still pretty crappy the second time around. I forgot to grab a scope capture of the response but it was pretty similar to Figure 1 only the passband was a few dB lower than seen there. It appeared my efforts had been for naught and having exhausted all ideas I could think of I decided to hit the books to see what was really going on in my circuit.

Stay tuned for the Chapter 3 for the stunning conclusion. I promise I will have it out much sooner than it took to get Chapter 2 out.

One of the circuits I have to design for my thesis is a bandpass filter.  Based off the specs I was presented with back in the early fall a filter with f_center = 100 MHz and Q = 250 was required; plus f_center needed to be tunable without changing Q. Not exactly the easiest design in the world but I studied up on a few topologies and settled on the Dual Amplifier Bandpass filter (pages 5.74 and 5.93).  According to Matlab and some hand calculations a 4th order filter was all I needed. 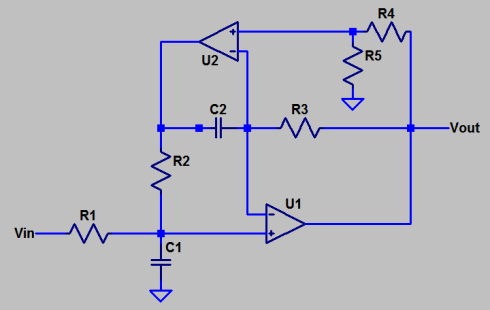 Cut to Rev. 1 of the board and not a single aspect of the filter met spec or even remotely functioned as a bandpass filter.  Simply scoping the output showed my design self-oscillated around 50 MHz, fantastic.  Adjusting the potentiometer I put in place for R2 merely shifted the frequency of oscillation. No amount of debugging or rework could make the filter behave and according to one of my professors, my use pots in the first place was a recipe for disaster because of high parasitics along with poor overall performance at high frequencies. Another important thing to note was my use of a current feedback amplifier as opposed to a conventional voltage feedback amp  because of the higher bandwidth and slew rate they offer at high frequencies (foreshadowing, this will haunt me later on…).

After discussing things with my advisor we decided our first attempt was too ambitious and to spin a second revision of the board only this time with a few changes in the specs.  Mercifully, having a tunable center frequency was no longer required. It was determined that this feature wasn’t necessary in the prototype stage and that designing a new tuning method would take too much effort, thus preventing me from completing more important aspects of the project.  The center frequency was also dropped to 10 MHz which lowered Q down to 25 giving a much more achievable design.  Refining my Matlab simulations and hand calculations showed that I was actually incorrect on my first attempt (whoops) in regards to the number of stages.  With these new specs I would need a sixth order filter.  I decided to keep using a current feedback amplifier though I changed parts from Rev 1 and picked the THS3202 from TI.

With my first design having crashed and burned I turned to PSpice to see if I could get my design working in simulation before spending time in hardware chasing something that may prove to be a dead end.  Using  Intersil’s AN1613 (mentioned in my last post here) I downloaded the Spice model for the THS3202 from TI’s website, incorporated it into my schematic and began simulating.  I eventually got my filter working and meeting spec with the help of some compensation techniques from other app notes I discovered and got the results below in Figures 2 and 3.

From these figures everything appears to be in order, there’s a nice bandpass shape to the filter that met spec, a decent response to being hit with a 100 uA current pulse for 30 us, yadda yadda. All that should have been left was to slap it on a PCB and make sure it functioned right?  Stay tuned for Chapter 2 as our story continues…